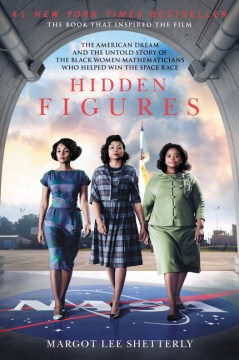 I just saw the movie Hidden Figures (2017) at Lowes AMC Theater in Port Chester. (We also have the book in our collection by Margot Lee Shetterly published in 2016.) It stars one of my favorite actresses – Taraji Henson (Detective Carter from Person of Interest). She plays one of three women, who had a profound effect on the space program at Langley Field during the sixties. Despite Federal laws, African-Americans were still discriminated against, and considered less intelligent than whites. They had separate bathrooms, water fountains and coffee pots. Many were passed over for promotion. They were left behind. But when some nagging problems threatened to derail the space program, these three managed to find solutions and raise their status among their peers. The stakes were increased when Russia launched its first Sputnik. These three women used their skills to get America back in the race. Fortunately, they received recognition later in life.

The title has a double meaning. It refers to some ancient algebraic and geometric calculations that helped solve a launch problem; but it also refers to how the African-American women were consciously and subconsciously kept in the background.

This is a very solid movie with supporting actresses Octavia Spencer and Janelle Monae. Kevin Costner and Jim Parsons (Big Bang Theory) round out the cast. It provides a unique look at the space program, and human relations during the tumultuous sixties.