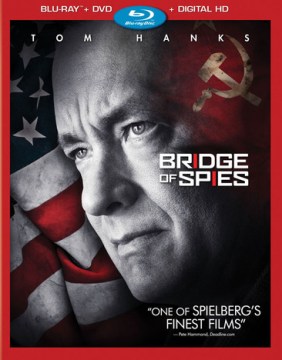 One of the movies I meant to see in the movie theater earlier this year was Bridge of Spies (2016) starring Tom Hanks. As luck would have it, it came and went, and I missed it. Thank goodness Greenwich Library has it in its DVD collection!
The movie is set in the late 1950s and early 1960s, when I was growing up. As I started to watch the movie, I began to recognize the names of the key players in two very high profile events. The first was Soviet spy Rudolph Abel, who was captured in 1957 and convicted of sending sensitive information to Russia. In 1960, pilot Gary Francis Powers was captured by the Soviets when his U2 plane was shot down by a Russian missile while on a reconnaissance mission. This was the time the Russians started building the Berlin Wall. The Berlin Airlift was also organized to bring food to the east.
Tom Hanks plays a lawyer, who works for an insurance company. He is approached by the CIA to act as a defense lawyer for Abel. Later, he is again enlisted to go to Russia to broker the release of Powers, using Abel as his bargaining chip. Hanks learns of another American, who is imprisoned by the East Germans when the student gets caught behind the Berlin Wall. Hanks is determined to get both Powers and the student freed. When he arrives in Russia, he is surprised and bewildered by the red tape he encounters. He must negotiate separately for both men’s release by using Abel for collateral.
This movie is very suspenseful and fast-paced. The acting is superb, and the cinematography is tremendous.
I recommend this movie very highly.